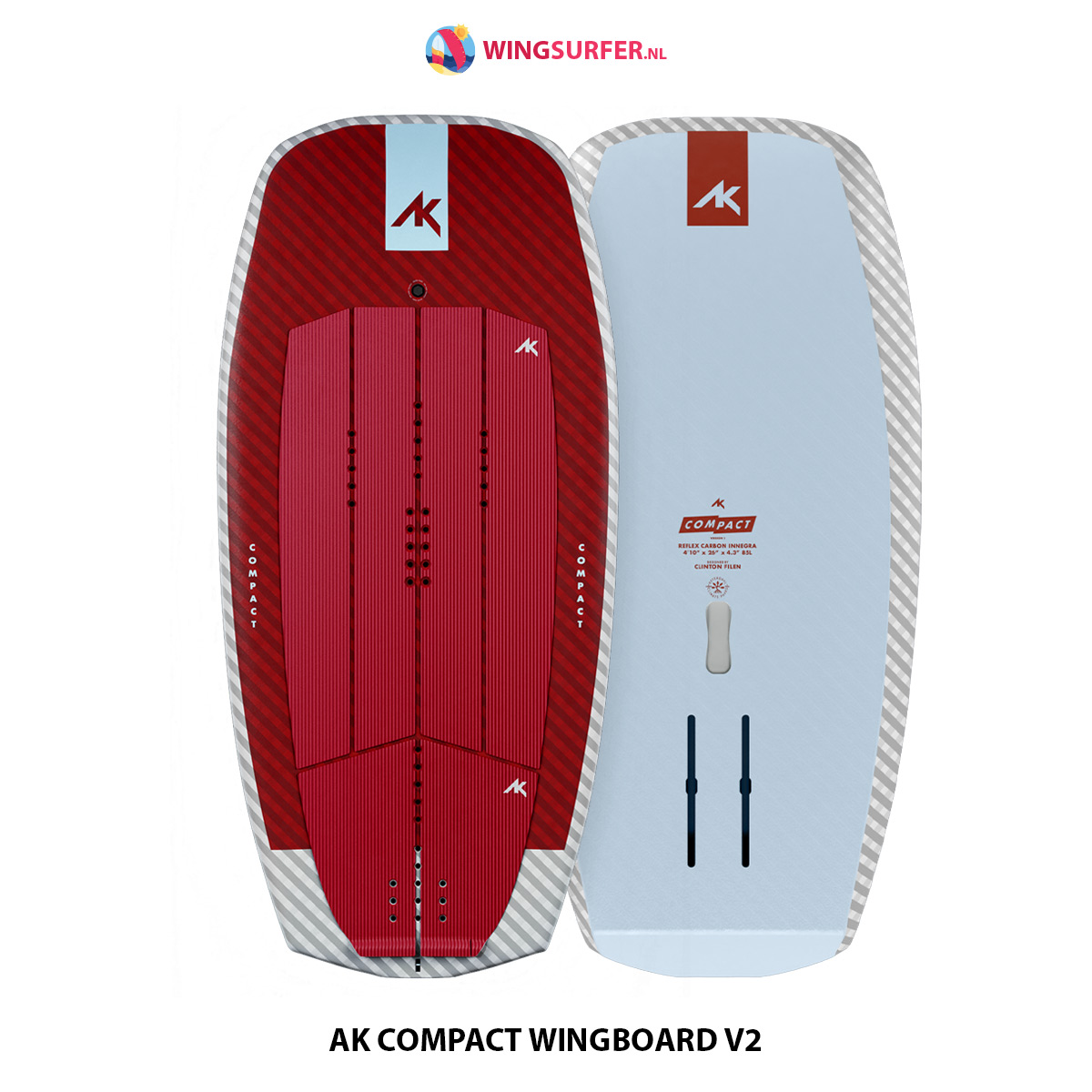 The Compact has been fully optimized for wingboarding, with its highly concentrated volume, and low swing weight. Perfect for intermediate to advanced wing riders in lighter conditions, the stable platform and centralized volume create a board that is easy to throw around when jumping and doing progressive maneuvers. The high apex rail maintains the feel of a narrow board, with stability provided by the additional width when not planing.

WIDE NOSE
For pure wing performance, we kept the Compact as short as possible, with the wide nose keeping volume up front, and the rails parallel. This creates directional stability at low and high speeds, and spreads the volume more evenly between the nose and tail.

THICK PROFILE
Packing a surprising amount of float into such a short length reduces the swing weight, keeping the board easy to pump and turn. The volume is optimized for stability and works with the high apex rail to keep the board as nimble as possible.

HIGH APEX RAIL
The high apex combines the stability of a wider board with the ability to turn more aggressively as you would on a board 4 inches narrower. These work in conjunction with the hard release edge in the tail and a softer release in the nose for intuitive touchdowns and fast releases. This unique combination makes the Compact easier to use in lighter wind without sacrificing performance as you get up on the foil.

CONCAVE DECK
The concave deck lowers the riders center of gravity on the board and places the buoyancy higher on the rails, creating a more stable sub-planing platform. It also makes you feel more connected to the foil, improving the stability and response when pumping and turning.

BOTTOM SHAPE
The rounded nose and softer rails help prevent the nose from sticking on touch downs, instead recovering without losing too much speed. The mid-section runs into a single concave for maximum planing speed and works in conjunction with the hard rails in the tail area for a quick water release during partial touchdowns.

Covering an ultra-lightweight fused EPS core, the Reflex Carbon Innegra shell provides exceptional flex and response. Innegra, an inherently lightweight and impact-resistant material, dissipates and absorbs a tremendous amount of energy, greatly reducing vibrations. The heavy-duty foil connection features a high-density load plate, which carries the load of the foil and connects it to the top deck for a direct connection between the foil and the rider.

KICK TAIL
The bottom kick tail allows the rider to tilt the board upwards, assisting to force the nose to lift and release from the water. It also reduces the tail touching the water when pumping and turning.

Shipping outside the Netherlands
We ship to all EU countries. You can calculate your shipping rate in the shopping cart. VAT: Since the first of July 2021 we charge VAT from the country of which the order originates from.
We also ship to the USA & UK and other countries. Some on special request only. Outside the EU you don’t pay 21% Dutch VAT. You might be obliged to pay local customs charges and VAT on import.